Here below a blog post that I wrote for the LSE Brexit Blog. The original post is here . Feel free to let me know your opinion (who hasn’t an opinion on Brexit, really?) and thanks again to Ros Taylor for inviting me to the blog.

The aftermath of Brexit has been characterized by a spike in anti-immigrant and racist acts. In particular, the British association Tell MAMA (Measuring Anti-Muslim Attacks) denounced a rise in Islamophobia after the referendum. This suggests that Brexit might be connected with a specific understanding of British identity that excludes Muslim minorities as “other” to UK culture.

Two studies I published in Information, Communication, and Society and Religions explore Islamophobia on Twitter after Brexit. Islamophobia is defined by the Runnymede Trust as “unfounded hostility towards Islam,” where Islam is connoted as a manipulative ideology unable to accept democratic and secular values. Imran Awan’s study on Islamophobia on Twitter shows that the majority of recently reported anti-Muslim abuses occur online, and they can reach the same symbolic violence of street-level aggressions. Brexit may have created particularly favourable conditions for the diffusion of anti-Muslim tweets because Twitter was frequently employed during the referendum campaign, especially by Leave supporters, as leading UK academics have noted.

I analysed a sample of 2005 tweets connected to the referendum. The tweets were selected through a Twitter API search employing the keywords “#Brexit” “Islam” and “Muslim.” Because these tweets were sent between 23 and 30 June 2016, they are likely to represent an impulsive response to Brexit rather than the totality of Brexit-related discourses about Islam.

An analysis of the tweets reveals that the majority of the messages (66%) connote Islam in a negative way. They can be classified as Islamophobic because they do not offer any constructive criticism of Islam, but rather offend, provoke, and belittle all Muslims only by virtue of their religious identity. By contrast, 18% of the tweets, written either by self-identified Muslims or by non-Muslims, condemn post-Brexit Islamophobia. The hashtag #Brexit was employed both by Remain and Leave supporters, but the majority of Islamophobic tweets are connected to the Leave position.

Table 1: Number of tweets that contain positive, neutral, and negative framing of Islam and the percentage they represent in relation to the total (approximated to the closest whole number)

The words that appear most often in the tweets have been classified in various semantic areas, each identified by a keyword (for example, the word “migration” includes tweets that mention “migrants,” “immigrants,” and “immigration”). A close analysis of the Islamophobic tweets finds that the majority of them touch upon broad social categories, often referring to race/migration, politics, and gender.

Figure 1: Most-frequently used terms in the dataset of tweets 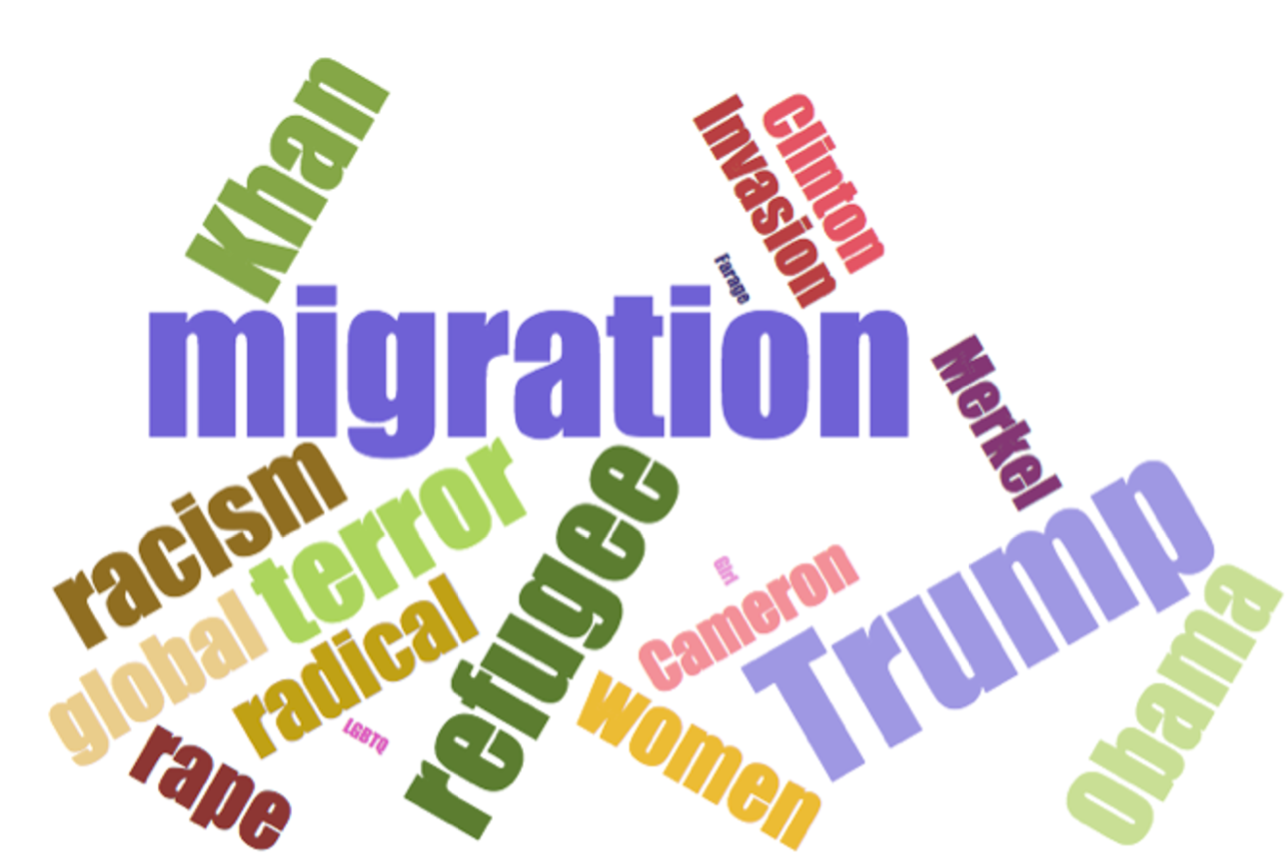 The issue of race/migration is frequently mentioned in the tweets. The decision to leave the EU is not directly connected with Islam, but in practice it will prevent citizens of European countries with a predominantly Christian tradition migrating to the UK. However, many tweets praise Brexit for allegedly stopping the migration of Muslim individuals. In so doing, they automatically (and naturally, mistakenly) associate all Muslims with migrants, something that ignores both the presence of British-born Muslims and of non-Muslim migrants. Brexit has been considered by some as a solution against a dangerous “other” entering the national borders, in this case represented by Muslims.

Among the most frequently quoted terms are politicians’ names. While British politicians such as Nigel Farage and Sadiq Khan are sometimes mentioned, the majority of the tweets refer to global politics. This suggests that there are symbolic connections between Brexit and far-right populist movements in other countries, the US in particular. Tweets often blame democratic and moderate politicians –such as Hillary Clinton, Barack Obama, and Angela Merkel –accusing them of trying to “diffuse Islam” by promoting globalism and facilitating migration. Politicians such as Donald Trump, who was elected president of the United States in the same year as the referendum, are praised for allegedly protecting US and European values by trying to “Make Britain Great Again.” Some voters probably saw Brexit as a rebuff to traditional politicians and a boost to those who appeal to global publics through nationalist and racist claims.

Many tweets also discuss gender. In particular, they describe Muslim men’s sexuality as uncontrollable and exaggerated. Muslims allegedly take multiple wives and father numerous children, and rape white women and girls. These discourses are connected to a specific understanding of gender norms and roles that largely ignores the viewpoints of women. While some Twitter users self-identify as women, the majority of discourses frame women as powerless subjects. This reinforces the idea of Brexit as perpetuating a “us” versus “them” dichotomy: while white British women need to be “saved” from Muslim men, Muslim women are often ignored and not considered part of British culture.

The analysis of Islamophobic tweets shows that Brexit unleashed some violent narratives that are part of a complex understanding of social and political identities. While it would obviously be incorrect to associate all Leave supporters with anti-Islam positions, Islamophobia is probably one of the elements that helped to create the conditions for Brexit to happen. The referendum’s result seems to partly validate the diffusion of certain anti-Islam, racist, and populist discourses. The violence of Islamophobic Twitter narratives has to be understood against an increase in hate speech on social media, facilitated by the diffusion of so-called “bots,” “trolls,” and “fake news.” The circulation of Islamophobic tweets suggests that some Brexit-related discourses framed “western” identity in non-inclusive terms and unleashed social anxieties about Muslims as the foreign “other.”