(Chimamanda Ngozi Adichie, The Danger of a Single Story)

I was recently invited at La Sapienza University in Rome to give a talk about hate speech and media for a summer school in the field of religious studies. I accepted with enthusiasm, because Professor Alessandro Saggioro and the team who invited me are great friends and incredibly smart colleagues. Plus, I mean, it’s Rome, you don’t have many chances to teach in an amazingly beautiful (albeit chaotic) place like that.

I’ll explain here why I’m interested in hate speech and then I’ll present the main points of my talk, which is also a summary of an academic interest I am planning to explore in the next years.

Why hate speech and social media?

The summer school I took part in was titled “Religions and peaceful coexistence.” I know what you are thinking: everybody gave lectures about all the wonderful ways religious pluralism can happen, and I was the killjoy talking about triggering and depressing topics.

Yes, it was exactly as it seems.

If you consider that the lecture was on September 11 and I started talking about all the ways people of different faith are attacked and persecuted all over the world, you have a picture of how my lecture started 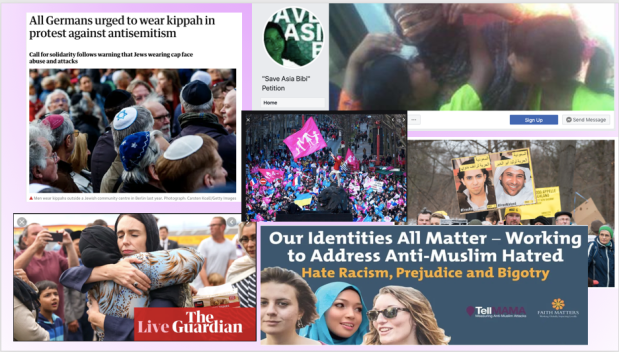 My opening slide, with some pictures about hate speech/religious persecutions/and other terrible things

Sometimes people ask me if I don’t get depressed looking at such narratives, or if I maybe would prefer to address my research to a more cheerful direction. I do, of course. I usually need intense sessions of Netflix and candies after working with certain data. I was pretty sad analysing Islamophobic tweets after Brexit, it was depressing to look at homophobic blogs, and I am not enjoying following far-right politicians on Twitter (my latest academic “hobby”).

However, I do believe that it is our role as scholars to study society in general –also what we don’t like about it. The more we focus only on the positive stories (social justice, people helping minorities, progressive politics), the more we risk losing sight of the reality of the world. A practical example: I was 100% convinced Brexit would never happen, and afterwards the election of Trump came as a total surprise. Why? Because I always and only talk with people who welcome migrants, praise multiculturalism, advocate for religious diversity. In so doing, I completely misunderstood the political situations around me. As we see politicians worldwide writing racist, xenophobic and Islamophobic messages, it is increasingly relevant to think about hate speech and understand it academically.

Also, studying hate speech allows working beyond the little borders of academic research. It is something that can result in guidelines, countermeasures and recommendations. For instance, I worked for the German government for a report on religious freedom, social networks and hate speech (it’s not over yet and I’m just a consultant, so maybe I shouldn’t mention it or brag about it? Too late, I did it already). I believe it’s important to study the bad guys if we want to fight them, and, hopefully, build a future where we don’t need to study them anymore.

What can you say about hate speech and social media?

My take on hate speech & social media (which I also used for my talk in Rome), is that it is fundamental to understand what hate speech is, and why social media have (or can potentially have) a crucial role in spreading it. So I structured my talk around some questions:

What is hate speech?

There are various legal/official definitions of hate speech. A useful one from the International Covenant on Civil and Political Rights (ICCPR):

“Any advocacy of national, racial or religious hatred” that constitutes “incitement to discrimination, hostility or violence shall be prohibited by law”Art. 20(2)

Since I have been working on Islamophobia, I also use definitions provided by Tell Mama and the Runnymede Trust.

After defining what hate speech is, it is also useful to understand why this happens and how can we understand its mechanisms.

I like to think about the framework of hegemony to understand how hate speech works. In particular, the work of Antonio Gramsci and Raymond Williams (and Cultural Studies in general) is useful to study hate speech. They define hegemony as a set of dominant values supported by people, rather than something imposed from above. As a result, every person who deviates from established hegemonic norms is potentially marginalized and, therefore, subject to hate speech. For example, non-white, non-Christian, non-heterosexual people might be victims of hate speech because they cannot be placed in the hegemonic model that praises white/Christian/heterosexual families.

I also believe that the work of Chantal Mouffe on agonism and antagonism is very informative. Mouffe explains that conflict is embedded and necessarily in society, and it can be positive or negative. When all groups enter in conflictual debate, but they are recognized as equal actors in participation, we have agonism, which is positive. However, in a situation when a certain group is prevented from entering in conversation with others, we have antagonism, which is negative. Antagonism is where hate speech occurs. In the case of Islamophobia, Muslims are seen as antagonistic and attacked, but they are rarely involved in public debates. For instance, television programs or newspaper articles may talk about Muslims in negative terms, but they often do not invite a single Muslim to defend themselves or give their own opinion.

The frameworks of hegemony and antagonism are useful to think about hate speech in general terms, and not only applied to religion. I focus mostly on anti-religious discourses, but they are often entangled with questions of race, ethnicity, migration, and gender. For instance, people might be victim of Islamophobia because they look like Muslims (they have a beard, they come from South-East Asia), without necessarily being Muslims (Awan and Zempi, 2018)

Hate speech, therefore, is incitement of hatred against a group or an individual, affected by hegemonic dynamics and which considers many identity characteristics together. It is not something  recent, but there are new ways it is now spreading through the Internet. This does not mean, of course, that digital media are all bad and evil. They can do great things (I wouldn’t spend so much time on Twitter, otherwise), but there are also some characteristics that are potentially dangerous.

First, social media allow for people interacting in an anonymous way. They can connect (and attack) people from all over the world protected by a screen. They react immediately without thinking of consequences (Brown, 2018). So… yes, that can help to spread hate speech.

Second, we have the impression that we consume everything on the Internet in a neutral way, but most of what we see is determined by algorithms. Having a Ph.D. in media studies, many people ask me questions such as “why do I keep seeing racist posts on Facebook?”. One answer could be that, well, they have racist friends. But there is also the fact that we don’t see all the posts in our social media feeds, we see those we interact the most with, and that algorithms propose us. We don’t pay Facebook in money, but we do that with the advertisement we are made to consume and that, looking at our characteristics, algorithms show us. Since I am a woman, I got ads for wedding dresses, and after years without changing my Facebook relationship status, I started to see ads for weight loss (I guess the idea is: if she still unmarried, she must be fat). Algorithms might be artificial intelligence, but they are also man- (and, one might say, white-man) made, so they reflect the biases of our society. Which might result in people always being proposed the same content, and getting the impression that this content (which might promote hate speech) is the dominant view of everybody on the Internet, in what is called “algorithmic enclaves” (Lim, 2017)

Third, people have access now to a lot of information, but are not necessarily more informed. There’s a natural tendency to read news which already support what we believe, and stick with people who think as we think. This is of course not new and does not happen only online, but it is easier for people create groups with other like-minded people online, in a phenomenon called “polarization” (Yardi and boyd, 2010)

Forth, social media are full of insidious little beasts. There’s the trolls, users that intervene in online debates expressly to create conflicts (Sanfilippo et al., 2018). Then we have the bots, computer programming that mimic human behavior, but are actually generated by an algorithm (Jones, 2015). Last, we find fake news, which are circulated by a creator who knows they are false, but circulates them anyway. Apparently, fake news often involve religion or religious people (Douglas 2018). So, trolls and bots and fake news often propagate hate speech because, well, that’s sort of one of the reasons they are created for in the first place. 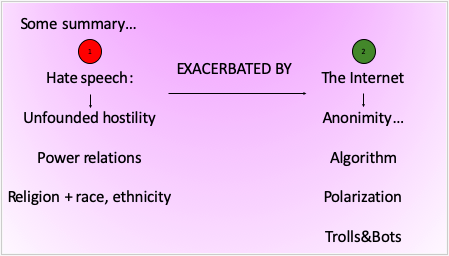 This is a visual summary of my talk

All I wrote so far sounds pretty terrible. But  I am still optimist that something can be done.

For example, at the end of my lecture, I divided the students in groups and I asked them to think about case studies of online hate speech and how to counteract it. I was really pleased to see that they came up with very nice ideas and guidelines against hate speech, including possible campaigns to let members of minorities speak for themselves against marginalization. They are grad students from Italy and all over the world and it was really interesting to hear their experiences and suggestions, something that shows how academics can also offer practical strategies against hate speech.

(In general, it was a pleasure to work with such smart students. There was also someone coming from my MA program and I don’t know if I shall encourage them to become like me, or advise them to drop immediately and become an accountant in Vicenza).

The day after my talk I joined the participants and the organizers of the summer school for a walk in the Roman neighbourhood of Tor Pignattara, and we could see some practical examples of how religious coexistence can happen: a refugee center that helps people of all faiths and cultures starting a new life in Italy; a mosque were some Muslim youth told us what it means to belong to Italy and Islam at the same time; a Hindu temple just next door from the mosque where we were welcomed by stories of how the Bangladeshi community lives in Italy.

So, after all, we were all left with some optimism.

As always, I am curious to hear your comments and questions, and here I have a documents with some relevant literature on the topics I quoted in this post.